The Time Has Come...to get stabbed for the greater good

COVID-19 has gotten everyone in a tizzy. And whether you believe in it or not, that choice is up to every individual. Some people think its a hoax. Other people feel like once they get the vaccine the world will automatically go back to normal. Some dont want the vaccine.

Personally, for me, when i heard about the vaccines, my decision was made. Greater number of people vaccinated, means a greater possibility of Herd Immunity and the sooner things will go back to normal. Now, im not one of those people who thinks it will magically happen overnight, but i know i will do my part in progressing the world back to normal.

I had my suspicions that it was going to last 2 years like previous pandemics and no matter how quickly things seemed to be progressing with a vaccine we were not going to be out of the woods yet. I predict that even with the majority of the population vaccinated, wearing masks, social distancing(to some degree) and obsessive hand washing/sanitizing will become normal for quite a few years.

The first step though-getting vaccinated. The UK government has been doling out vaccines based on critical vulnerability and age, working from oldest to youngest. The time finally came that i got invited to have my vaccine on Friday, so i thought id do a little run down of how it was for me at least in case anyone was curious.

I should say that i originally got a text inviting me to get my vaccine before it looked like my age range group opened up. I snatched that up, but unfortunately the day before my vaccine, i was super ill (unreleated to covid) so i had to cancel my jab. :( sad times. When i felt better i did rebook, and by that time loads of my friends seemed to be getting the text invitation so our age group mustve opened up.

The booking system was really easy to manage. Super easy to cancel and rearrange. And you had the option to book your second jab as well and it showed you only the bookings for the time you needed (with the appropriate number of weeks between each jab).

The day of my appointment it was fairly smooth sailing as well. There was a small queue to get in the building as they were doing a one out, one in type of system. Someone at the door asked some standard questions, then as the queue moved, you took a step into the building. Next step inside the foyer i got checked in with the booking code and verifying person details (name, d.o.b. etc). Another few steps and i was shown to an available station to get the vaccine.

The centre where i got my jab was giving out the Pfizer vaccine, which is actually the one i was hoping id get. When i got inside I was asked a few more standard questions, including if im right or left handed to determine which side i got the jab in(the non dominate side). The shot itself took all of 5 seconds and didnt hurt any more than what youd expect a needle prick to be. I was handed some leaflets, and a timer set for 15 minutes and told to have a seat until that time was up.

Done, dusted. I felt fine straight after. I could barely even see the pinprick of where the needle went in. Later that evening i only noticed the injection site hurt a bit when it was touched because Henry was jumping all over me and putting some serious pressure on my arm. Ouch.

Day after, again no major side effects except feeling stiffness in my arm and being tired.... then again, weve been having a heat wave lately, so it could just have been the sweltering heat tiring me out. All in all I think i had a good experience with the Pfizer vaccine and i am very thankful. Im hoping that the next jab goes just as smoothly. 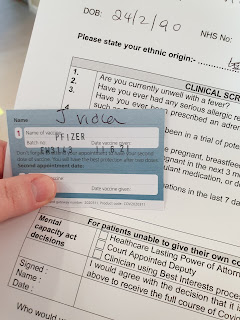