A New Year, so it must be time for a new blog post! 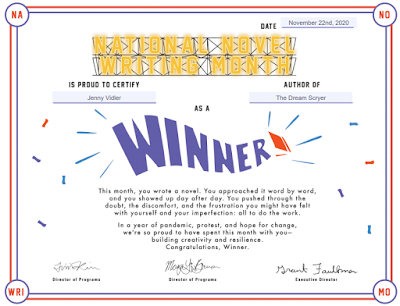 Nanowrimo has been and gone, so all my writing energy was sucked up in the 30 days of November. I'm proud to report that I have successfully written another Novel, and I went over the target of 50,000 words, AND I still have a sequel to write for next year! Thank goodness for epic fantasy genre stories.

Then the British Nation had to deal with "Lockdown Christmas" which was a bit of a whirlwind. Where we live, we started off December with lighter restrictions for good behaviour--able to go out to Restaurants and shops with social distancing measures-- but then that quickly turned into a bad idea and then the nation as a whole was told nope-no Christmas for anyone. So, in true British fashion everyone complained about not seeing loved ones for Christmas, but then actually felt so comfy indoors that we forgot people outside our four walls even existed for about a 2 week period.

And then January happened...and we're still not out of the woods yet, being put on another National Lockdown for the foreseeable future. So, even though I've been stuck at home, I've kind of been busy with the ever growing restrictions/lockdowns the UK has been under.

Let's face it...I also get so busy I forget I even have a blog. That sums up my life in general, but I certainly feel that way during this past year. Living life in a pandemic is a weird parallel universe where things are the same, yet not the same at all. 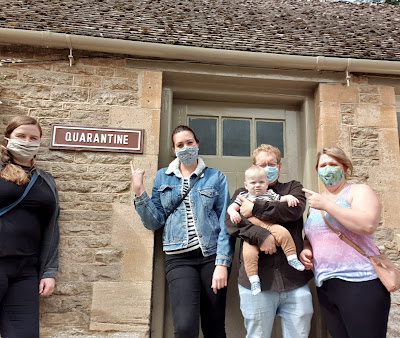 We've been lucky that, although we've been cautious, we've actually managed to keep some level of normalcy around our lives the past year.

Rob, although not been able to go out and do Races, has still been using time at home to go out running.

I've been able to visit a small selection of people this year during the pockets of time where the government allowed socialization and give Henry some sort of 'Normal' example of outside life.

And Henry for the most part has still been able to socialize with kids his age regularly through Nursery.

I was going through my diary and the pictures and videos I had taken throughout 2020 and I could easily count the amount of days that I had been out in a social setting. That made me sad, but I did realise that it was a pandemic year and also I spent the better part of the first 2 months still wrapped up in baby madness and didn't go out except for baby classes and to celebrate my birthday. Then I noted the times that I was just out of the house for ANYTHING where I could be in close proximity to other people (grocery shopping, petrol station, into town, picking Henry up from nursery, going to work, going for a walk etc)....it scares me that I estimated, the amount of days I was 'near people' added up to about 20% of the days in the year. On one hand I'm very depressed that I only got out of the house a 5th of the year, but on the other hand, I'm scared that I LET myself go out for that much while a global pandemic was happening.

Don't get me wrong, we've been safely keeping distance where possible and wearing masks, washing our hands, and trying to be responsible for the most part, but life goes on. I know that when I've been out (however little or however much that is...depending on which mood I'm in), I've been trying to be safe and my sort of way forward is that I'll be continuing safety measures long after the mandate has been lifted by governments.

In my opinion, there are going to be loads of people who refuse a vaccine to COVID-19. There's also the rule that no one under 16 in the UK will be vaccinated so there still will be transmission between households. And at some point 'Herd Immunity' could take hold, but no one knows for certain when that will be. SO I will err on the side of caution and I plan on still distancing and wearing masks and not travelling for a good long while after life 'resumes' again.

I will take small liberties when I feel brave enough to go out when we are allowed, but I shutter at the thought of anything grouping large people together. I've got a concert that was rescheduled to this June and I really hope it gets postponed again because I don't think I'd be able to go that soon after the way things are now. Same with travel. I know loads of people who are planning their next vacation and dreaming of going abroad, but I'm still very hesitant to get on a plane anytime this year. Maybe by 2022 things will look better and my anxiety won't be making warning sounds to my brain.

Everyone has their own way of dealing with this pandemic. I've put them into 4 categories of what I've seen and I think that everyone fluctuates between these four mindsets:

The Overly Cautious--Don't leave the house. Obey the law. Stay at home.

Reasonably Cautious -- Obeys the rules most of the time, but thinks some are down right ridiculous and will do what they want within reason. They're sensible people, who break the rules, but with good rationale.

The Ignorant-- Nothing registers on their radar and they go along in ignorant bliss. Either that or the ones who think Covid is a Hoax, or that the rules don't apply to them

The Rebels-- They know what's going on. They just don't care...because FREEDOM > consideration for health--theirs or anyone elses.

The people I know usually fall between the first 3 categories on different days/different circumstances. Some people fluctuate more than others. I have yet to come across someone personally who fits into the 4th category but I have heard stories of those types of people. I can't say that I understand people's rationale for one extreme or the other. 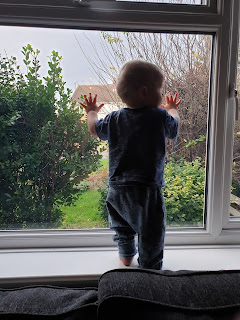 I'm not so fussed for myself. Besides the downfall of not seeing friends, I'm quite happy to hide in my own little bubble reading books, crocheting and watching streaming services until the end of the world. Let's just say I can't wait for things to go 'back to normal' so that I feel more comfortable taking Henry out. Sometimes it's like Henry sees 'the world' as our house and Nursery and I can't wait to introduce him to more now that he's old enough to start absorbing everything he sees.
The other day we had someone come around to clean our windows, gutters and solar panels. Henry was FASCINATED. He couldn't stop starring out the windows and knocking on them. It was like Brenden Fraser in 'Blast From The Past' coming out of the bunker for the first time and seeing other people besides him mom and dad.
"LOOK! PEOPLES!!!!"