Its a Small World after all (Manifesto-Part 1) 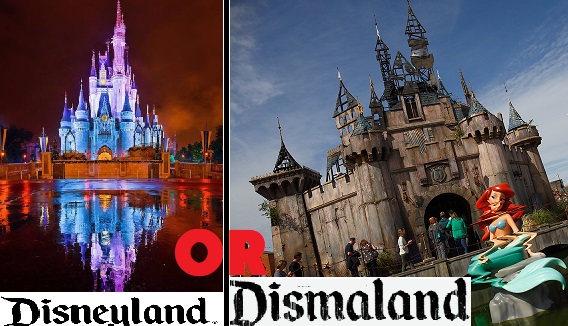 One of the hardest things for me to do is keep my mouth shut when there is injustice. Seriously, I once got detention when I was 12 for getting into a physical fight with a bully after she wouldn’t stop tormenting a girl younger than us at school. Was it right to fight verbal violence with physical violence? Probably not. But I couldn’t just stand there and watch while this younger girl was being bullied. I don’t tolerate bullies.

As I got older I learned to hold back my fists and try to talk things out whenever I was faced with a problem. Slowly over time I learned to pick and choose when to speak up about my discomfort in something, and when it just wasn’t worth it to leave well enough alone. For the past 2 years I've had an onslaught of bad interactions with a local business that i used to love. I feel like ive turned a blind eye to some bad business practices, shrugged off some less than desireable conversations and just learned to solider on. For probably longer than two years, I’ve been supressing my thoughts about this establishment, because if I spoke up it would be a futile effort and the outcome wouldn’t be the most desirable.

Do you know those people that just can’t take constructive criticism? That everything you say in trying to help them is seen as a personal attack? For example, a director might tell an actor that they need to enunciate their words better when reciting lines on stage. A good actor would take the note and enunciate their words clearer, while someone else would grumble and moan about it being the director’s fault (bad hearing, etc) for not understanding the words. The business owner I have grievances with is an example of the later and it’s the main reason why I haven’t said anything until now.

To put it even more in perspective, I once complimented this business owner for hiring such an amazing member of staff in regards to a new employee. Instead of feeling pride for their ability to hire the right people that heighten their business, this owner looked offended. It was almost as if they thought I held their new employee in higher regard than I held them and it was completely unacceptable. What was meant to be a complement of their hiring skills was taken as a personal attack.

So when I say that I haven’t spoken up for fear of the backlash, just know this: Even when I mean to compliment them, their narcissistic tendencies somehow have twisted the compliment on their staff into a negative reflection of themselves; therefore, anything actually negative about them would surely have a more volatile outcome.

The reason I speak about this now is because I see so many of my friends suffering with the same or similar grievances and it breaks my heart. I’m hoping that by writing all of this down that not only will I be unburdening myself of all these toxic feelings I’ve been harbouring, but anyone who has suffered the same wrongs will not feel as alone.

Know that you are welcome to come and talk to me freely without fear of judgement or retaliation – a safe space to air your grievances instead of holding it in inside.

First of all let me preface this by saying that anyone who knows this establishment and knows me will know exactly who and what I am referring to. I know that for every one person who will be on my side because they have experienced similar things, there will be an army of loyal followers who will rally against me…and that’s okay. I would just ask those who will take up arms against my words that you truly look deep within yourself and ask ‘Is it necessary?’ , ‘Is this my fight?’, ‘Will it change how I feel if I bully someone for stating their opinion?’ I am not here to tear people down or tell you what to do, I am simply stating my opinions and that facts I have to justify those feelings, so please choose to be kind, not blindly loyal.

I have known many strong independent business owners, and while they may not operate on a ‘perfect image’ corporate level, they still all have a level of tact because they know they are the face of their business. I have NEVER experienced the level of unprofessionalism that this individual presents as a business person. There is a long list of grievances that I have both personal and about the business practices. I won’t dwell on the petty “he said, she said” antics, but I will express how this establishment has affected my mental health. And because I have a lot to say, I will be separating these into different blogs so they are easier to digest.

For now, here is the vaguest overview of the turn of events that brought on the need to write this series of essays and air my grievances:

In the last year and a half, I have not given my patronage to this business more than twice due to my pregnancy and being post-partum, however I have been roped into drama unnecessarily.

I haven’t physically set foot in the business since January. I have not engaged in any contact with the business or its owner, even on social media, in so long because of the toxic atmosphere I feel and wanting to remove myself from that circle and move forward with my life.

The last time this business owner was in contact with me via message/social media was June.

I received a Whatsapp message from said business owner, asking if I could let them know what they’ve done to upset me.

Up until now, I have stuffed down my feelings. I have silently removed myself from the situation to save my sanity and not rock the boat in the process. But due to my past of having been ‘ghosted’ without explanation by so-called-friends, I felt it would be hypocritical of me to do the same. So, in the most kind and articulate way I could muster at 10-o-clock at night, I sent that person a message back, saying just that. 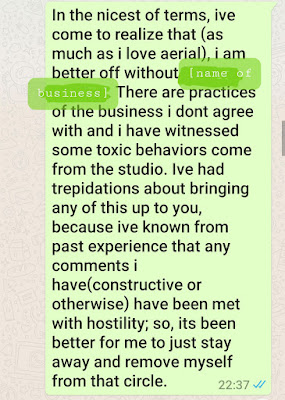 What I was sent back was somewhat of a surprise- an olive branch. A chance to meet up and air not only my grievances, but present the concerns of many other patrons I’ve talked to on the subject. I think the exact words i got from the business owners response was “…I would actually love to hear more about this so I can work on this and hope no one ever feels this way in the future...”

Although I was not happy to be a bearer of bad news, I was excited at the prospect of this individual finally being open to feedback. Myself and countless others who have been jilted by this business would finally have a chance to be heard in hopes that things would change for the better. But this dream may have been to short lived. In the midst of back and forth messages trying to arrange a time for a meeting, my final message bounced back. It was sent, but never delivered. The message was never seen.

In fact, it took a friend of mine to casually mention that she was blocked on social media by this same individual, for me to actually investigate if I had been blocked in the same capacity. I checked my Whatsapp message….found it wasn’t ‘delivered’ and then noticed that this person’s contact picture had disappeared from the conversation ‘bubble’. I checked facebook…can’t see their profile (aka blocked). I checked Instagram…also invisible to me (aka blocked again).

Just when I imagined that things could be resolved, and a meeting would be held to have a civil conversation I surmise that it was all pomp and circumstance and a meeting was never going to happen anyway. In a last attempt to make things right, I sent an e-mail… something that hasn’t been blocked…to the business and announced that although the act of blocking me was unprofessional, I was still genuinely willing to give them the feedback they asked for.

I don’t know what will come of this, or if it will be an never-ending saga. I don’t know if they ever truly desired the feedback and to grow their business into something better for the future, or if it was all a façade. ….All I know is that it has gone this far and I would be remiss if I didn’t speak up for the dozens of people I personally know that have suffered trauma, mental anguish, exploitation, low self-esteem, injustice, and unfair encounters with this person and their business, especially when so many have claimed it to be their ‘happy place’ in the past.

It begs the question...was it ever a happy place? Was it my version of Disneyland? Or are we all looking through rose tinted glasses and eventually find out that its Dismaland after all?